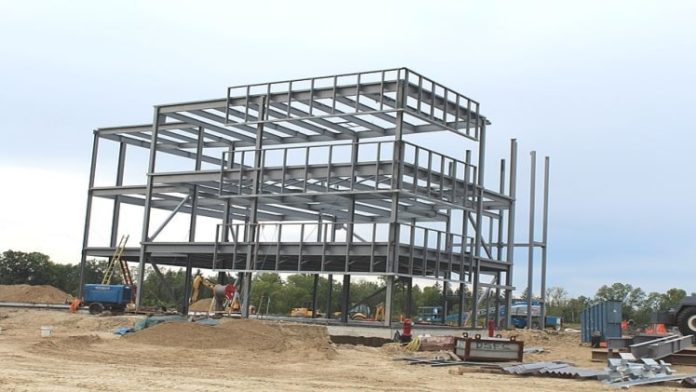 For the most part, a steel frame consists of a vertical column and horizontal beams attached to one other via rivets, bolts, or welding. Structural steel beams are horizontal elements that withstand lateral loads applied to their axis. Compressive loads are transmitted by using columns, which are vertical structural components used to create structural steel framing.

Steel Framing with a Skeleton

A skeleton’s framework is typically utilised to construct multi-storey structures. It comprises a network, or system, of columns and connecting beams which support the building’s inner floors and outer walls and carries all loads to the foundations. Masonry walls are supported by spandrel beams erected around the structure’s perimeter. The structure’s criteria need to define the distance between each column to obtain the correct lengths.

Numerous components and steel connectors are used to link steel beams to columns in skeleton frame constructions. The employment of metal brackets helps to disperse the produced stresses when connecting columns and beams, among other things. Adjustments in line and elevation can be made using shims. To secure the spandrel beam and column, use shelf angle brackets. To secure bolts and welded joints, flexible end plates, fin plates, and double angle brackets are utilised, respectively.

Framing of Steel for the Walls

With wall-bearing steel framing, masonry walls are erected around a building’s perimeter or interior, and structural steel components are then attached to the masonry walls using bearing plates and anchor bolts. Wall-bearing framing is dependent on the weight and distance between successive supports for its design and construction. To enhance the clear headroom height of the structure, lesser depth beams necessitate tighter column spacing, which reduces clear floor space.

An external or interior wall is meant to sustain this construction system’s roof/floor load. Any additional horizontal load must be able to be absorbed by these solid and rigid frames. Lower-level constructions are built with the framework because multistory buildings require a significantly larger bearing wall to withstand the additional weight.

In situations when traditional beams and columns are not acceptable, Long Span Steel Framing is employed. A large span is longer than 12 metres. It provides the installation of numerous utilities and the mixed-use of space, flexible floor space, interior areas devoid of columns, and a decrease in the duration of on-site building. Large industrial structures, auditoriums, theatres, and exhibition halls are familiar places to find it. Projects with more giant arches and greater weights are more likely to employ this frame system.

There are several sorts of long-span steel frame alternatives.

PublisKnow All About Honor 70 Specs

Honor 70 Mobile: What You Need To Know